Martin Palmer laced on his running shoes and took on a total of 135km this year, completing an epic seven medal challenge to raise awareness about severe allergies and raise money to support the Anaphylaxis Campaign.

“I went out for a nice bit of Torbay sole in 2000 when I was working down in Plymouth, and that was the last piece of fish I had” Martin revealed when he came along to the Anaphylaxis Campaign’s offices to show us his glittering hoard of medals.

He explained why a seven medal challenge was so significant. “I put off going to the Doctor for a month or so – he explained that I’d had an anaphylactic reaction and prescribed me an EpiPen®. The nurse wasn’t quite so polite – she said, ‘if you do that again you’ll likely be unconscious after six minutes and dead after seven’. That has stuck with me; so, when I worked out that if I ran four Disney races I would get seven medals, it took me right back to that conversation.”

Martin is not the only member of the family living with food allergy; his daughter Alice, aged 5, is allergic to milk, rice and egg. Martin’s wife Helen explained that when Alice was about 5 months old, her eczema was very severe. Their GP had come back from a course on milk protein allergy, so they cut milk out of their diet for a time.

“Her skin was absolutely clear, so the GP said, ‘she seems OK, you can start breastfeeding again’ but by Friday she had open wounds on her face, her arms and her tummy,” Helen said. “When the GP looked at her, he couldn’t believe it was the same child he had seen two days earlier.”

The family had heard the Anaphylaxis Campaign mentioned, but had never quite plucked up the courage to get in touch. Martin said, “Weirdly, a part of me didn’t want to admit that I had allergies. I mean, I carry an EpiPen®, I’ve got a little band on my wrist that says I’m anaphylactic, but I just didn’t want help.”

However, a change encounter about two years ago started him on the road to his epic seven medal challenge journey. Martin explained, “there was this guy on the train who had something about fish and allergies on a laptop, so I was quizzing him, saying ‘what’s all this about?’. It turned out that he had been to the lectures that our doctor went to and I thought, ‘I must find out what’s going on’.”

Helen added, “we’d just had a test the week before for Alice, and it was quite upsetting because, although she’d grown out of a few allergies, it revealed milk was still bad, and eggs too. Milk and eggs are so fundamental to a western diet, and its surprisingly tiring to read every ingredients label and check she’s getting all the right vitamins and minerals.”

Martin said, “When I realised there was so much really useful and important information on the website, it made me think – ‘what can I do to help?’ – which led me to where I am today.”

Martin decided to self-fund running two races at the Disneyland® Paris Magic Run Weekend to complete the Bibbidi-Bobbidi-Boo Challenge and two races at the Disney® Wine & Dine Half Marathon Weekend in Florida, to earn the Castle to Château Challenge medal – seven medals in total. He also clocked up four extra races during training as well as completing a 10k Santa Run challenge to round off the year, an amazing 135km in all! 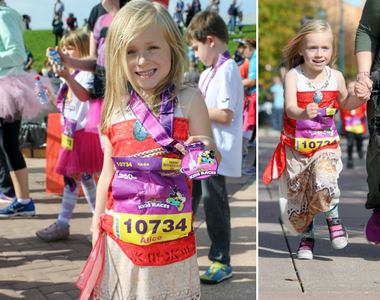 He initially planned only to wear one costume at the Paris races, but friends and family soon had him dressing up at every occasion; “I said to my friends, so if I can raise £500 I’ll wear the Maui costume again… within 20 minutes I’d got that amount!” Martin also dressed up as Wreck it Ralph and Indiana Jones in Florida and Alice also was able to join in with the RunDisney 200M Kids Race dressed as Moana, making the whole occasion a truly family affair.

We’re so grateful to Martin for taking on the challenge and raising just shy of £1,000 for the Anaphylaxis Campaign. You can support his fundraising efforts on JustGiving here.